Photo (s): Laura Kraut on Cedric, Nick Skelton on Big Star, Rolf-Goran Bengtsson on Casall La Silla & Gerco Schroder on London - © HT-GCT
(No part of this article may be copied or reproduced in any form without the permission of HT)

By the GCT
Photos: Laura Kraut on Cedric, Nick Skelton on Big Star, Rolf-Goran Bengtsson on Casall La Silla & Gerco Schroder onLondon - © HT-GCT
(No part of this article may be copied or reproduced in any form without the permission of HT)

THE EQUINE ATHLETES THAT MAKE THE GLOBAL CHAMPIONS TOUR COMPETITIONS ARE SPECIAL. THEY ARE THE EXCEPTIONAL SHOW JUMPING HORSES THAT CREATE SUCH DYNAMIC, NAIL BITING CONTESTS AT EACH GRAND PRIX THROUGH THE SEASON. MANY OF THESE CHAMPION HORSES ARE FAMOUS AROUND THE WORLD WITH FAN CLUBS IN DIFFERENT NATIONS. HERE IS A FRESH AND OFTEN HUMOROUS INSIGHT FROM THE PERSPECTIVE OF THE HORSES - WITH A LITTLE HELP FROM THEIR RIDERS OF COURSE!

At just 15.2 hands and at the age of 15 years, Laura Kraut’s hugely popular grey gelding Cedric puts in amazing, fast performances, winning the GCT Grand Prix in September 2012 at the Tour’s first ever event in Lausanne, Switzerland and placing 4th in the Grand Prix at GCT Chantilly last summer. Among numerous successes as a combination, Laura won US team gold with Cedric at the Beijing Olympics in 2008 and continues to impress with great agility and pace in jump offs. The little Holsteiner grey by Chambertin and Carolus Z attracts enthusiastic support from crowds, always makes a great effort in the arena and has a deceptively fast stride.

Lausanne because I won there but also because I loved standing in the lake there.

I like the evening because there are lots of people there to watch me and see how good I am.

No, not too much. I just try to stay fit but sometimes Laura likes to practice on me, which is fine, but I also like galloping around my paddock which keeps me fit.

Everything that everybody loves to eat. I’m not too fussy.

My paddock, then I’m free and I can do what I want.

What are your ambitions for 2013 with your rider Laura Kraut?

To go to Lausanne again and win many Grand Prixs.

I like Itot and Ninja because we are all about the same size and we can watch each other to see how the course is riding. I also love going in my paddock. I love winning and I’m a born traveller, I love to see the world. I don’t like my girth being pulled tight!

Nick Skelton happily admits, Big Star is “the perfect horse” and one of the best he has ever ridden. The phenomenal bay stallion has added an Olympic team gold medal to his career triumphs after huge success at the 2012 Games in London. In the same year he won the GCT Grand Prix of Hamburg. The Dutch bred superstar by Quick Star and Nimmerdor helped Nick to a healthy 9th place in the overall GCT 2012 ranking. Nick has already said he will be aiming for the next Olympic Games in Rio when Big Star, born in June 2003, will be 13 years old.

Hamburg because I won there.

I prefer the day time and warm climate.

I don’t need to train a lot because I’m very good, but sometimes Nick likes to jump me over small jumps.

I love my hay, nuts, grass when I can get near it and of course candy.

My paddock and around the roads in England

What are your ambitions for 2013 with your rider Nick Skelton?

To win many GCT’s and also to be European champion because I made a mistake in London and I let Nick down and now that I’m 10 years of age I’m more experienced, so this shouldn’t happen again.

I dislike walking through water, but I love going in the field and going to the shows when Nick rides me well of course.

Champion Swedish rider Rolf-Göran Bengtsson and Casall were part of the amazing nail-biting GCT 2012 finale. The Holsteiner stallion jumped brilliant Grand Prix rounds through the season and was placed 2nd in the GCT events in Hamburg, Cannes and Lausanne. The combination also came 3rd in Valkenswaard and scored strong points at other GCT shows. Rolf describes the stunning 14-year-old dark bay by Caretino as an amazing performer and “a nice guy”.

For me it was Hamburg, because it is always nice to be in front of the home crowd: a lot of Holsteiner breeders and friends were there!

Actually it doesn’t really matter to me – and at the shows, where it is really hot, we are mostly working in the morning or in the evening, where it is quite comfortable. And in the stable we then have air conditioning!

In daily work I am mostly being taken care of three times a day: once I am ridden, then I go to the walker or the tread mill, and when the weather is good I am in the paddock or I take a walk with Celia (my groom)
For the shows Rolf always has a scheduled plan for some weeks in advance, so before the shows we do some jumps at home.

Müsli with carrots! I simply love that!

I rather like to work outside in the fresh air.

What are your ambitions for 2013 with your rider Rolf-Goran?

Mainly we will be going to the shows of the GCT – and for sure I will try to help him win the European gold medal again!

I very much like going to the paddock – but I do not like sugar! And I do not really like bad weather with rain, deep ground etc. either……

Gerco Schröder describes London as “a very special horse” and says he knew he would be a champion from an early age. London had a hugely successful GCT season during 2012 and finished 6th in the overall championship ranking. Extremely careful over fences and with a big scope, London won the GCT in Cannes in an amazing jump-off against champions Cevo Itot du Chateau and Casall La Silla. Dutch rider Gerco and Belgian-bred London were 2nd in Abu Dhabi and 3rd in Vienna. Born in 2002, the chestnut stallion by Nabab de Reve added two Olympic silver medals - team and individual - to his list of triumphs in 2012.

Cannes, because I won there after an exciting jump-off with Itot and Casall.

When it’s really warm, then I prefer in the evening. I like nice sunny weather, but not too hot.

I come out a few times a day with the walker, in the field and riding and before a show we jump a little.

My normal food and the sugar I get from my groom Lais.

I love to gallop through the forest next to our stable.

What are your ambitions for 2013 with your rider Gerco?

Gerco and I hope to get some good results in the Global Champions Tour, so that we can improve our overall result from 2012.

I love all the attention I get at home and at the shows and I don’t like to stay at home when the other horses are going to a show. HT 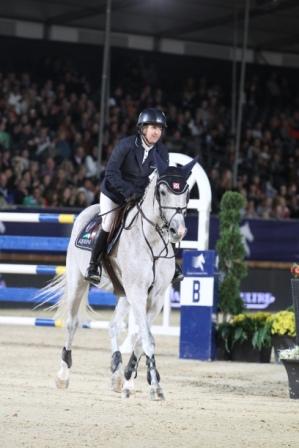 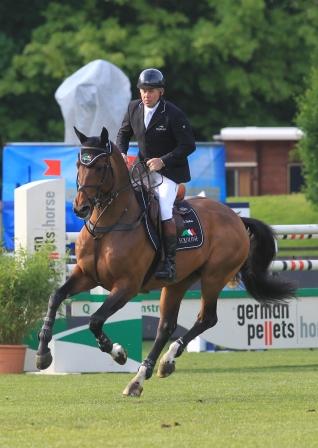 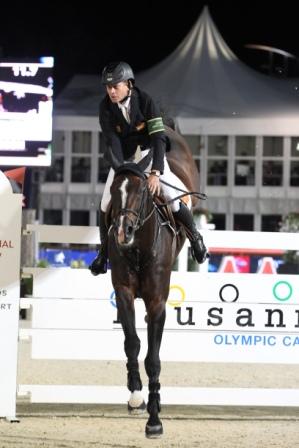 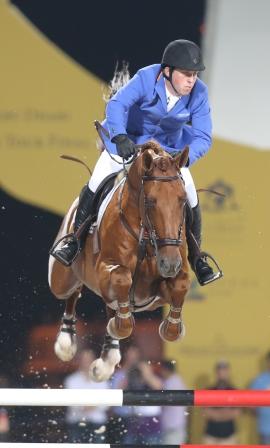 Haidar R. Al Zu’bi Concept Of The Rule...Consequences Of The Decision