CHRISTMAS COMES EARLY FOR HOLLY IN THE CAYENNE PUISSANCE

Olympia, the London International Horse Show had crowds sat on the edge of their seats, as the Cayenne Puissance took flight. Holly Smith (GBR) and Christopher Megahey (IRL) both went clear in the 5th round to take home the title in front of HRH The Duchess of Cornwall. Olympic Gold Medallist Nick Skelton, was also in attendance as he took part in a Q&A session with some lucky fans.

Holly Smith, who had never ridden in a puissance competition until this year, and the teenager from Ireland, Christopher Megahey, 18, a first-timer at Olympia, The London International Horse Show, shared the spoils in a thrilling finale to the Cayenne Puissance. With The Duchess of Cornwall, who was paying her annual visit to the show, looking on, the pair both cleared 7ft 1in in the fifth and final round. Holly (nee Gillott), riding the huge bay Irish sport horse Quality Old Joker, showed all her experience from the hunting field, saw the perfect stride and cleared the massive wall in superb style.

But then the young Irishman matched her for nerve and pinged over on another Irish-bred horse, his brother's former eventer Seapatrick Cruise Cavalier, in a result that will thrill fans of horses from the Emerald Isle. Norwegian rider Rebekka Lie Andersen finished third, having retired in the third round on Want To Do, and Britain’s Laura Renwick, who withdrew from the third round, was fourth on Top Dollar Vl. “It’s fantastic,” said Holly, 27. “All my friends are here to watch. I tried to treat it as a normal show, but it’s just got such an amazing atmosphere. The first three rounds didn’t actually go that well, but then I managed to see a forward stride in the fourth and he jumped brilliantly.” Christopher was equally thrilled. “I loved it – it didn’t faze me at all. It’s just brilliant being here, being around top riders like Marcus Ehning and Scott Brash.”

Earlier on in the day the Stephex Stables enjoyed a fantastic start to the show, with its riders claiming the first two international Show Jumping classes. The initial victory came from Germany’s Daniel Deusser, who took the Santa Stakes with nine-year-old stallion Hidalgo VG. “It’s great to start with a win as it gives you confidence for the rest of show,” said Daniel, who beat 11 rivals in the jump off and relegated Britain’s Ben Maher (Don Vito) to second. Italian rider Lorenzo De Luca took the Christmas Pudding Stakes, a speed class, riding Halifax van het Kluizebos, one of the Belgium operation's nine-year-old stallions. “He’s a very good horse now, having continued to improve and become more competitive in bigger classes,” said Lorenzo, who is an Olympia first-timer. “Getting the invitation to compete here was a dream come true,” he said. “To win on the first day is just fantastic.”

Preceding the first round of the FEI World Cup™ competition tomorrow, the Dodson & Horrell Extreme Driving at Olympia saw all seven competitors representing five countries. But it was the world's leading driver, current reigning World Champion both indoors and out, Boyd Exell (AUS), who snatched victory. Over a challenging course set by course designer, Johan Jacobs from the Netherlands, Exell was the last to go in the first round and was fastest at the midway point. However the brakes locked on his carriage as he drove over the bridge in the centre of the arena, making for a difficult turn into the first gate of the second obstacle. A resulting knockdown gave him penalties and put him into third place behind Koos de Ronde from The Netherlands and Jozsef Dobrovitz from Hungary. Dobrovitz, whose son is also competing in the competition, was the only driver to post a clear round at this stage, giving him the top slot.

In the second round, in which the top three placed drivers compete again for first to third place, Exell set the bar high with an excellent round despite one knockdown. Even with 5-penalties added the other two were unable to better his score and he claimed the win again, repeating last year's success in this competition. "I'll be making a few changes in my team for the World Cup competition tomorrow," Exell remarked. "But today's competition was outstanding. This Show produces an amazing atmosphere and really allows us to showcase our sport. To compete to such an enthusiastic crowd and a full house spurs us all on."

Course designer, Jacobs commented, "I expect all the drivers to make less mistakes tomorrow - there are always difficulties in the first competition. They will be competing over a different course although the obstacles are in the same place - I don't plan to make it any trickier than today though!" Along with the evening's Show Jumping and the Dodson & Horrell Extreme Driving, a special presentation took place as Tim Wilks was awarded the Raymond Brooks-Ward Memorial Trophy, presented to young riders demonstrating potential for future success in the forthcoming season. The Kennel Club ABC Dog Agility Final thrilled the crowd, but Jo Gleed and her dog Bonvivant With Extra Zoom were too quick for fellow four-legged competitors to clinch the victory.

Olympic champion Nick Skelton spent the day being feted by journalists and the crowd, who will no doubt be voting in their thousands for him on Sunday night in BBC Sports Personality of the Year. Speaking of his Olympic Gold Medal, Nick said “I never thought it would happen – I’d tried and failed so many times, but I think it means more to me winning a gold medal at my age than it would have done if I was younger”. 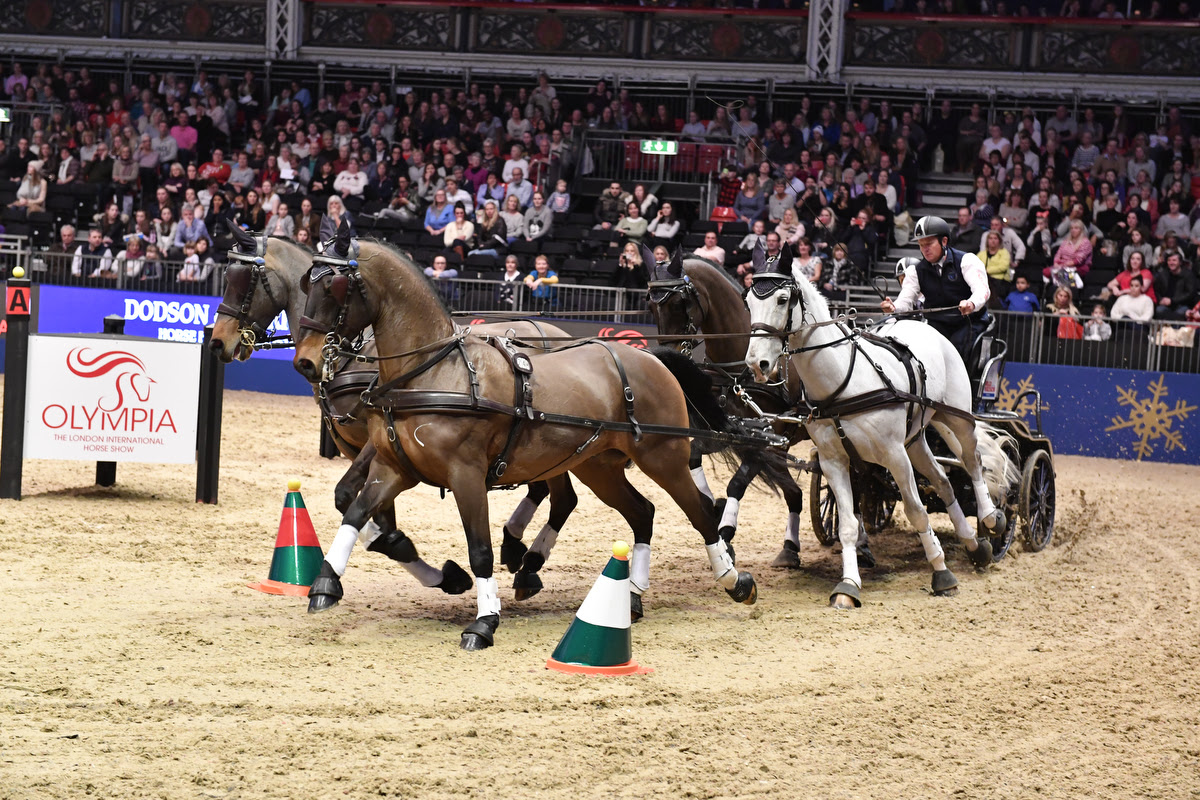 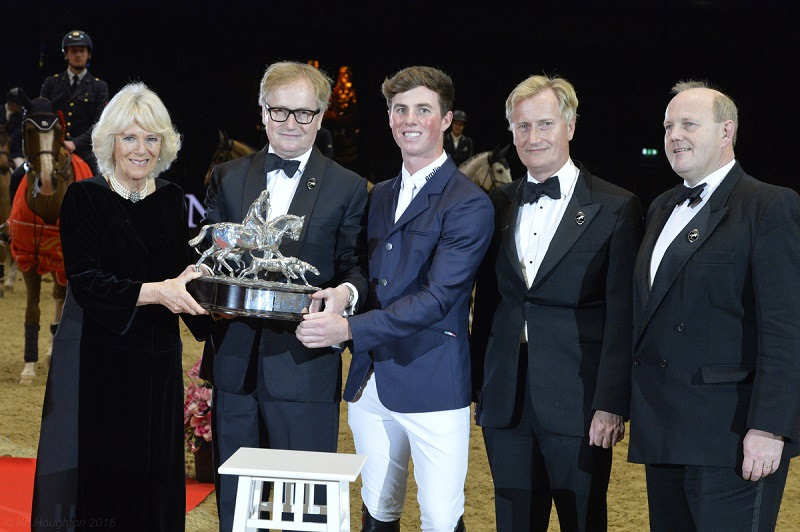 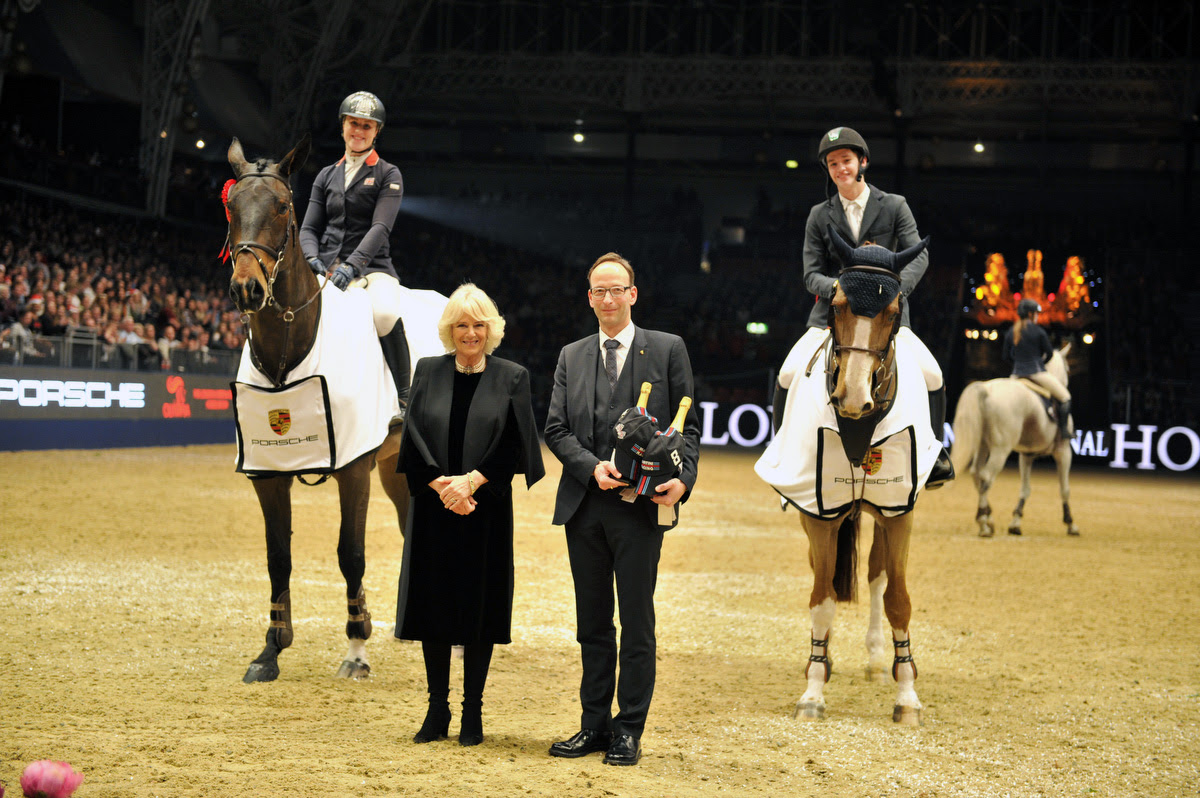 CARL HESTER DOES THE DOUBLE AS VALEGRO RETIRES IN STYLE