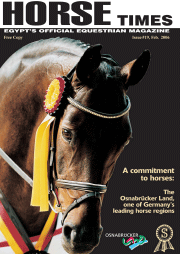 Issued February 2006, his issue features a huge section about the fascinating rich history of the Egyptian Arabian Horse and the controversy surrounding some of its strategic aspects of breeding. On the cover, a crown jewel: the mare 'Poetin'. World Champion introduced to the international riding sport by PSI & sold at the PSI-Auction 2003 for 2.5 Million Euros to Peter van der Zwan in the Netherlands. Following an executorial auction in the Netherlands, Poetin came to Mr. Marie in France. The mare (by Sandro Hit x Brentano II) is considered one of the word's most exceptional horses. Unfortunately the sensational success story of this mare has come to a recent tragic end; Poetin passed away! This issue features:

A Breeder and A Visionary; interview with Omar Sakr

A Business Perspective of the Show Jumping Sport; interview with Dr. Ahmed Shawki

Submission and Impulsion in Dressage